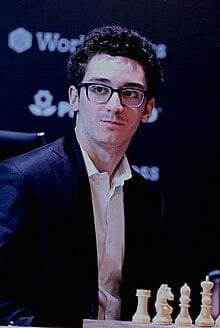 Fabiano Luigi Caruana (born July 30, 1992) is an Italian-American chess player. A chess prodigy, Caruana became a grandmaster at the age of 14 years, 11 months, and 20 days—the youngest grandmaster in the history of both Italy and the United States at the time.
Born in Miami to Italian parents, Caruana grew up in Park Slope, Brooklyn. He played for the United States until 2005, when he transferred his national federation affiliation to Italy. He earned his grandmaster title in 2007, and in the same year won his first Italian Chess Championship, a feat he repeated in 2008, 2010, and 2011. He won the Dortmund Sparkassen Chess Meeting in 2012, 2014, and 2015. Caruana also won the Sinquefield Cup 2014, recording a 3098 performance rating, the highest in history at the top level, and improving his rating to 2844, becoming the third-highest rated player in history. He transferred back to the United States in 2015.
Having won the FIDE Grand Prix 2014–15, Caruana qualified for the Candidates Tournament 2016, where he was runner-up to Sergey Karjakin. He won the 2016 US Chess Championship, and represented the United States on board one at the 42nd Chess Olympiad, winning team gold and individual bronze. He won the London Chess Classic in 2017. Caruana won the Candidates Tournament 2018, becoming the first American challenger for the undisputed World Chess Championship since Bobby Fischer in 1972. In the run-up to the championship match, he won the 5th Grenke Chess Classic, the 6th Norway Chess, and shared first in the 6th Sinquefield Cup. Caruana lost the match to Magnus Carlsen in the rapid tiebreaks after drawing all twelve of the classical games.