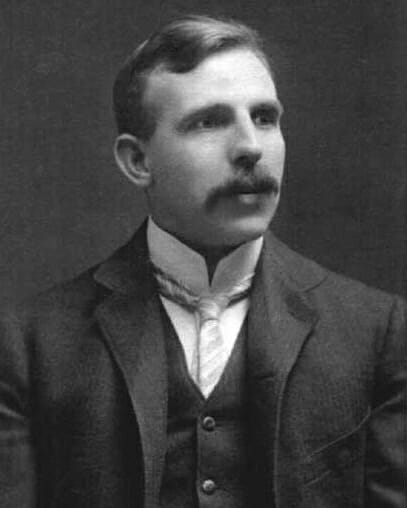 Ernest Rutherford, 1st Baron Rutherford of Nelson, (30 August 1871 – 19 October 1937) was a New Zealand physicist who came to be known as the father of nuclear physics. Encyclopædia Britannica considers him to be the greatest experimentalist since Michael Faraday (1791–1867). Like all New Zealanders at this time, he was a British subject, and spent much of his career in the United Kingdom.
In early work, Rutherford discovered the concept of radioactive half-life, the radioactive element radon, and differentiated and named alpha and beta radiation. This work was performed at McGill University in Montreal, Quebec, Canada. It is the basis for the Nobel Prize in Chemistry he was awarded in 1908 “for his investigations into the disintegration of the elements, and the chemistry of radioactive substances”, for which he was the first Canadian and Oceanian Nobel laureate.