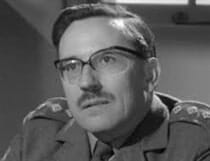 Eric Leslie Barker (12 February 1912 – 1 June 1990) was an English comedy actor. He is most remembered for his roles in the popular British Carry On films, although he only appeared in the early films in the series, apart from returning for Carry On Emmannuelle in 1978.