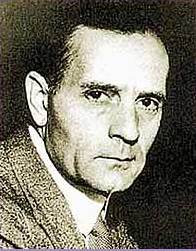 Edwin Powell Hubble (November 20, 1889 – September 28, 1953) was an American astronomer. He played a crucial role in establishing the fields of extragalactic astronomy and observational cosmology.Hubble proved that many objects previously thought to be clouds of dust and gas and classified as “nebulae” were actually galaxies beyond the Milky Way. He used the strong direct relationship between a classical Cepheid variable’s luminosity and pulsation period (discovered in 1908 by Henrietta Swan Leavitt) for scaling galactic and extragalactic distances.Hubble provided evidence that the recessional velocity of a galaxy increases with its distance from the Earth, a property now known as “Hubble’s law”, despite the fact that it had been both proposed and demonstrated observationally two years earlier by Georges Lemaître. The Hubble–Lemaître law implies that the universe is expanding. A decade before, the American astronomer Vesto Slipher had provided the first evidence that the light from many of these nebulae was strongly red-shifted, indicative of high recession velocities.Hubble’s name is most widely recognized for the Hubble Space Telescope, which was named in his honor, with a model prominently displayed in his hometown of Marshfield, Missouri.