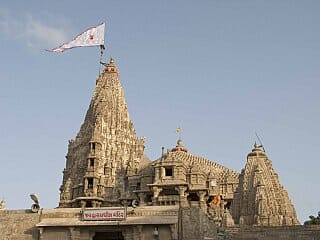 The Dwarkadhish temple, also known as the Jagat Mandir and occasionally spelled Dwarakadheesh, is a Hindu temple dedicated to god Krishna, who is worshiped here by the name Dwarkadhish, or ‘King of Dwarka’. The temple is located at Dwarka, Gujarat, India, one of the destinations of Char Dham, a Hindu pilgrimage circuit. The main shrine of the five storied building, supported by 72 pillars, is known as Jagat Mandir or Nija Mandir, archaeological findings suggest it to be 2,000 – 2,200 years old. The temple was enlarged in the 15th- 16th century. The Dwarkadhish Temple is a Pushtimarg temple, hence it follows the guidelines and rituals created by Vallabhacharya and Vitheleshnath.According to tradition, the original temple was believed to have been built by Krishna’s grandson, Vajranabha, over the hari-griha (Krishna’s residential place). The original structure was destroyed by Mahmud Begada in 1472, and subsequently rebuilt in the 15th-16th century. The temple became part of the Char Dham pilgrimage considered sacred by Hindus in India. Adi Shankaracharya, the 8th century Hindu theologian and philosopher, visited the shrine. The other three being comprising Rameswaram, Badrinath and Puri.