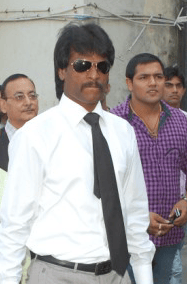 Dhanraj Pillay (born 16 July 1968) is a retired Indian field hockey player and former captain of the Indian national team. He is currently working with Air India Ltd. as Deputy General Manager (DGM). He also looks after the Air India Sports Promotion Board as a Joint Secretary based in Mumbai. Since the last 5 years, Dhanraj is overseeing the SAG Hockey Academy in Gujarat funded by the Gujarat Government. A legend of game, he is regarded as one of the best Indian players.Pillay born to a Tamil family made his debut in 1989 with the national team and in a career spanning over 15 years, appeared for India in four Olympic Games, World Cups and Champion Trophies each. He made 339 appearances for the national team and is recorded, unofficially, to have scored 170 goals. He also played for clubs in countries such as Malaysia, France, England and Germany. Recognizing his achievements, he was awarded the Padma Shri by the government of India in 2000.