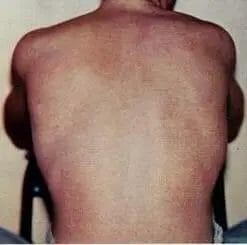 Dengue fever is a mosquito-borne tropical disease caused by the dengue virus. Symptoms typically begin three to fourteen days after infection. These may include a high fever, headache, vomiting, muscle and joint pains, and a characteristic skin rash. Recovery generally takes two to seven days. In a small proportion of cases, the disease develops into severe dengue, also known as dengue hemorrhagic fever, resulting in bleeding, low levels of blood platelets and blood plasma leakage, or into dengue shock syndrome, where dangerously low blood pressure occurs.Dengue is spread by several species of female mosquitoes of the Aedes genus, principally Aedes aegypti. The virus has five serotypes; infection with one type usually gives lifelong immunity to that type, but only short-term immunity to the others. Subsequent infection with a different type increases the risk of severe complications. A number of tests are available to confirm the diagnosis including detecting antibodies to the virus or its RNA.A vaccine for dengue fever has been approved and is commercially available in a number of countries. As of 2018, the vaccine is only recommended in individuals who have been previously infected, or in populations with a high rate of prior infection by age nine. Other methods of prevention include reducing mosquito habitat and limiting exposure to bites. This may be done by getting rid of or covering standing water and wearing clothing that covers much of the body. Treatment of acute dengue is supportive and includes giving fluid either by mouth or intravenously for mild or moderate disease. For more severe cases, blood transfusion may be required. About half a million people require hospital admission every year. Paracetamol (acetaminophen) is recommended instead of nonsteroidal anti-inflammatory drugs (NSAIDs) for fever reduction and pain relief in dengue due to an increased risk of bleeding from NSAID use.Dengue has become a global problem since the Second World War and is common in more than 120 countries, mainly in Southeast Asia, South Asia and South America. About 390 million people are infected a year and approximately 40,000 die. In 2019 a significant increase in the number of cases was seen. The earliest descriptions of an outbreak date from 1779. Its viral cause and spread were understood by the early 20th century. Apart from eliminating the mosquitos, work is ongoing for medication targeted directly at the virus. It is classified as a neglected tropical disease.