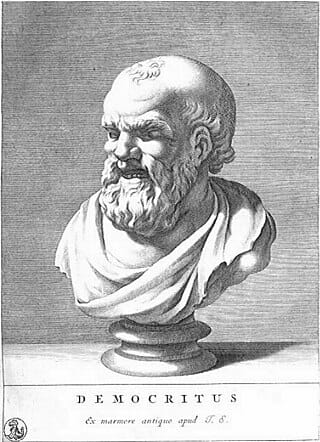 Democritus ( c. 460 – c. 370 BC) was an Ancient Greek pre-Socratic philosopher primarily remembered today for his formulation of an atomic theory of the universe.Democritus was born in Abdera, Thrace, around 460 BC, although there are disagreements about the exact year. His exact contributions are difficult to disentangle from those of his mentor Leucippus, as they are often mentioned together in texts. Their speculation on atoms, taken from Leucippus, bears a passing and partial resemblance to the 19th-century understanding of atomic structure that has led some to regard Democritus as more of a scientist than other Greek philosophers; however, their ideas rested on very different bases.
Largely ignored in ancient Athens, Democritus is said to have been disliked so much by Plato that the latter wished all of his books burned. He was nevertheless well known to his fellow northern-born philosopher Aristotle, and was the teacher of Protagoras.Many consider Democritus to be the “father of modern science”. None of his writings have survived; only fragments are known from his vast body of work.