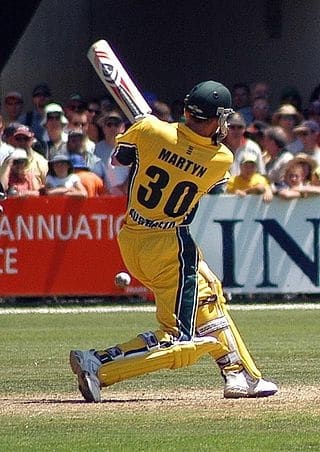 Damien Richard Martyn (born 21 October 1971) is an Australian cricket commentator and former cricketer, who played Tests and ODIs. He played for the national team sporadically in 1992–1994 before becoming a regular ODI player from 1999 to 2000 and a regular Test player in 2000 until his retirement in late 2006. He was primarily a right-handed middle-order batsman with a ‘classical’ technique, known in particular for his elegant strokemaking square of the wicket on the off-side and through the covers.
Martyn was also an occasional medium-pacer and distinguished fieldsman primarily in the covers who was capable of creating spectacular run-outs. He also very occasionally kept wicket at first-class level. He was named man of the series in the Border Gavaskar Trophy in 2004, to help Australia defeat India on the subcontinent for the first time in more than 30 years, and was named in early 2005 as the Australian Test Player of the Year at the annual Allan Border Medal presentations.