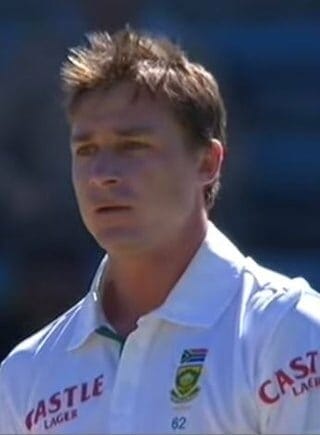 Dale Willem Steyn (; born 27 June 1983) is a South African former professional cricketer who played for the South African Cricket Team. He is often regarded as one of the greatest fast bowlers of all time and the best Test bowler of his generation. During the 2007–08 season, Steyn achieved a tally of 78 wickets at an average of 16.24, and was subsequently rewarded with the ICC 2008 Test Cricketer of the Year Award. He was named one of the Wisden Cricketers of the Year in 2013, and Wisden Leading Cricketer in the World for the year 2013 in 2014’s Wisden Cricketers’ Almanack. He was featured in Wisden Cricketers of the Decade at the end of 2019. He also was included in the ICC Test Team of the Decade at the end of 2020.Steyn dominated the number one spot in the ICC Test rankings during the peak of his career, for a record 263 weeks between 2008 and 2014. Sri Lankan Muttiah Muralitharan sits next on the list with 214 weeks. In terms of days, Steyn has spent 2,356 days at the top as of 6 October 2016, the most by any bowler since World War II. In October 2012, former South African test cricketer Allan Donald called the South African pace attack, which Steyn was part of, alongside Vernon Philander and Morne Morkel, the best South Africa has ever produced. In December 2018, during the first Test against Pakistan, Steyn became the leading wicket taker for South Africa in Test cricket, previously held by all-rounder and former-captain Shaun Pollock.On 5 August 2019, Steyn announced his retirement from Test cricket, to focus on limited-overs cricket. Steyn announced his retirement from all forms of cricket on 31 August 2021.