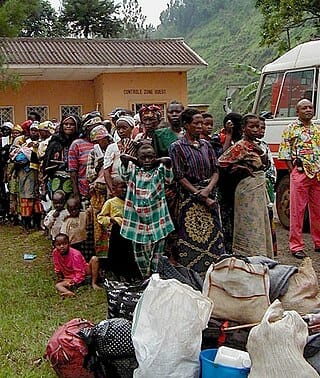 The Second Congo War (also known as the Great War of Africa or the Great African War, and sometimes referred to as the African World War) began in the Democratic Republic of the Congo in August 1998, little more than a year after the First Congo War, and involved some of the same issues. The war officially ended in July 2003, when the Transitional Government of the Democratic Republic of the Congo took power. Although a peace agreement was signed in 2002, violence has continued in many regions of the country, especially in the east. Hostilities have continued since the ongoing Lord’s Resistance Army insurgency, and the Kivu and Ituri conflicts.
Ultimately, nine African countries and around twenty-five armed groups became involved in the war. By 2008, the war and its aftermath had caused 5.4 million deaths, principally through disease and starvation, making the Second Congo War the deadliest conflict worldwide since World War II. Another 2 million were displaced from their homes or sought asylum in neighboring countries.Despite a formal end to the war in July 2003 and an agreement by the former belligerents to create a government of national unity, 1,000 people died daily in 2004 from easily preventable cases of malnutrition and disease. The war was funded by (as the conflicts afterwards have been) the trade in conflict minerals, among other things.