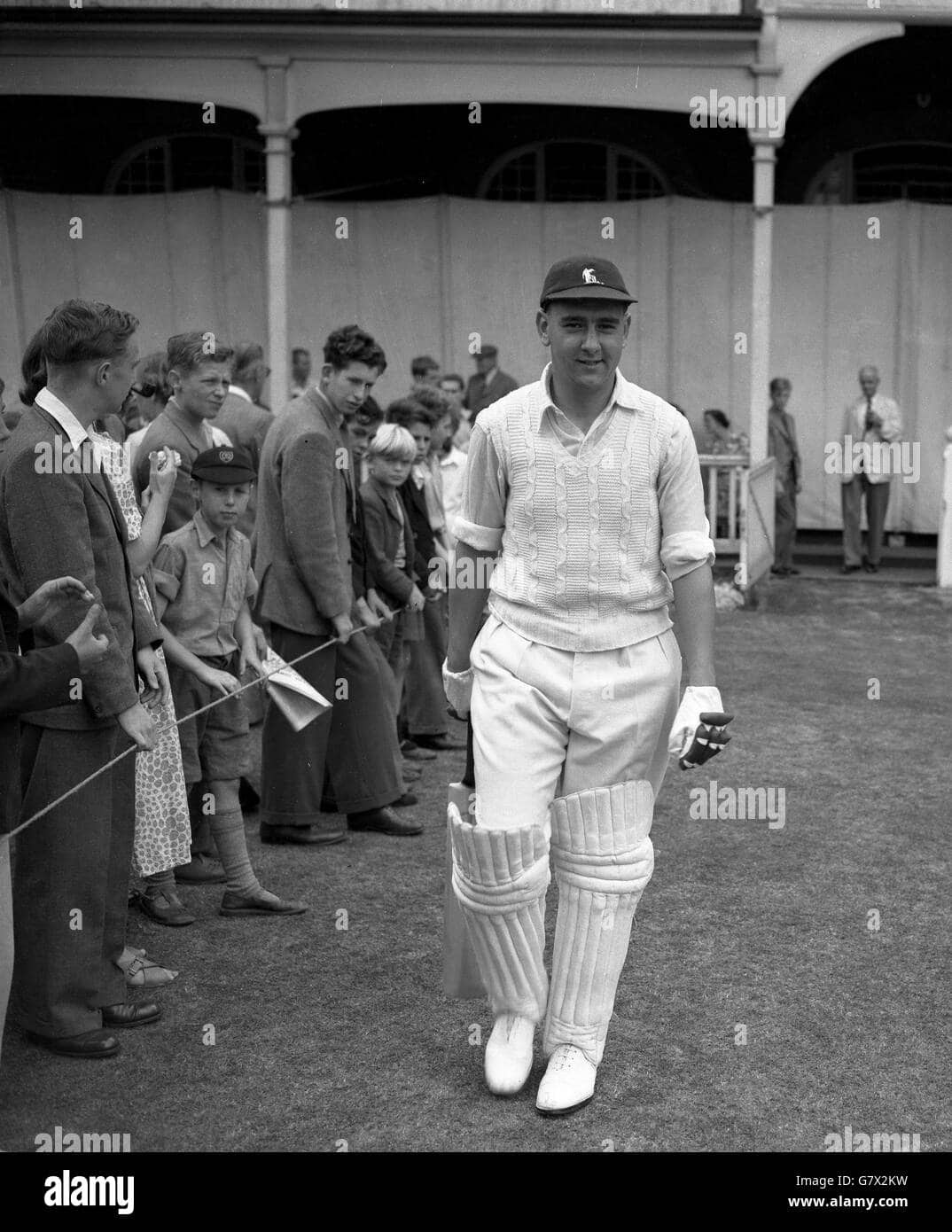 Michael Colin Cowdrey, Baron Cowdrey of Tonbridge, (24 December 1932 – 4 December 2000) was an English first-class cricketer who played for Oxford University (1952–1954), Kent County Cricket Club (1950–1976) and England (1954–1975). Universally known as Colin Cowdrey, he “delighted crowds throughout the world with his style and elegance”, and was the first cricketer to play 100 Test matches, celebrating the occasion with 104 against Australia in 1968. In all he played 114 Tests, making 7,624 runs at an average of 44.06, overtaking Wally Hammond as the most prolific Test batsman, and taking 120 catches as a fielder, breaking another Hammond record. Cowdrey made 22 Test centuries (an England record until 2013) and was the first batsman to make centuries against the six other Test playing countries of his era; Australia, South Africa, the West Indies, New Zealand, India and Pakistan, making hundreds against them all both home and away. He toured Australia six times in 1954–55, 1958–59, 1962–63, 1965–66, 1970–71 and 1974–75, equalling Johnny Briggs’s record, and in his last Test fans hung out a banner ‘M.C.G. FANS THANK COLIN – 6 TOURS’.In the First Test at Edgbaston in 1957 Cowdrey added 411 runs in 511 minutes with Peter May against the West Indies, the third highest stand in Test cricket at the time, the highest for the fourth wicket until 2009, the highest stand for England, and the highest stand against the West Indies. His highest first-class score was 307 against South Australia on the MCC tour of Australia in 1962-63, the highest score for the Marylebone Cricket Club overseas and the highest by a tourist in Australia.
Cowdrey was awarded a CBE in 1972, knighted in 1992, ennobled in 1997, and posthumously inducted into the ICC Cricket Hall of Fame in 2009. He is the fourth (and so far the last) sportsman to be honoured with a memorial service in Westminster Abbey, following Sir Frank Worrell, Lord Constantine and Bobby Moore. The Marylebone Cricket Club (MCC) Spirit of Cricket Cowdrey Lecture was inaugurated in his memory.