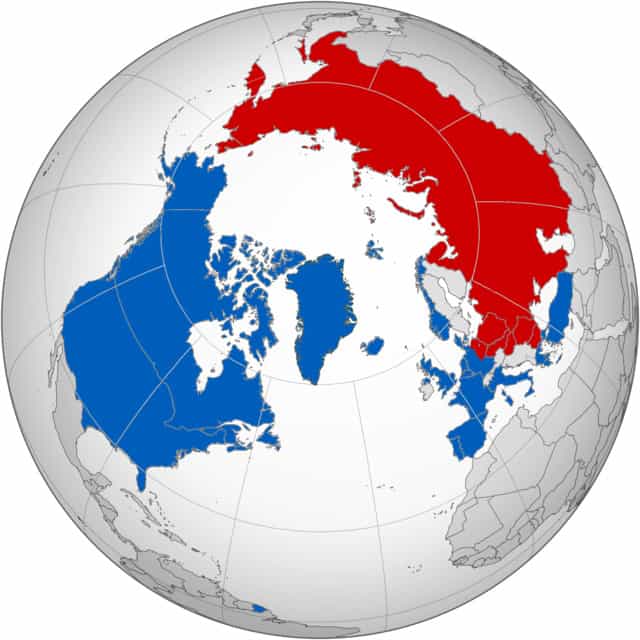 The Cold War was a period of geopolitical tension between the Soviet Union and the United States and their respective allies, the Eastern Bloc and the Western Bloc, after World War II. Historians do not fully agree on the dates, but the period is generally considered to span the 1947 Truman Doctrine to the 1991 dissolution of the Soviet Union. The term “cold” is used because there was no large-scale fighting directly between the two superpowers, but they each supported major regional conflicts known as proxy wars. The conflict was based around the ideological and geopolitical struggle for global influence by the two powers, following their temporary alliance and victory against Nazi Germany in 1945. The doctrine of mutually assured destruction (MAD) discouraged a pre-emptive attack by either side. Aside from the nuclear arsenal development and conventional military deployment, the struggle for dominance was expressed via indirect means such as psychological warfare, propaganda campaigns, espionage, far-reaching embargoes, rivalry at sports events and technological competitions such as the Space Race.
The West was led by the United States as well as the other First World nations of the Western Bloc that were generally liberal democratic but tied to a network of authoritarian states, most of which were their former colonies. The East was led by the Soviet Union and its Communist Party, which had an influence across the Second World. The US government supported right-wing governments and uprisings across the world, while the Soviet government funded communist parties and revolutions around the world. As nearly all the colonial states achieved independence in the period 1945–1960, they became Third World battlefields in the Cold War.
The first phase of the Cold War began immediately after the end of the Second World War in 1945. The United States created the NATO military alliance in 1949 in the apprehension of a Soviet attack and termed their global policy against Soviet influence containment. The Soviet Union formed the Warsaw Pact in 1955 in response to NATO. Major crises of this phase included the 1948–49 Berlin Blockade, the 1927–50 Chinese Civil War, the 1950–53 Korean War, the 1956 Suez Crisis, the Berlin Crisis of 1961 and the 1962 Cuban Missile Crisis. The USSR and the US competed for influence in Latin America, the Middle East, and the decolonizing states of Africa and Asia.
Following the Cuban Missile Crisis, a new phase began that saw the Sino-Soviet split between China and the Soviet Union complicate relations within the Communist sphere, while US ally France began to demand greater autonomy of action. The USSR invaded Czechoslovakia to suppress the 1968 Prague Spring, while the US experienced internal turmoil from the civil rights movement and opposition to the Vietnam War. In the 1960s–70s, an international peace movement took root among citizens around the world. Movements against nuclear arms testing and for nuclear disarmament took place, with large anti-war protests. By the 1970s, both sides had started making allowances for peace and security, ushering in a period of détente that saw the Strategic Arms Limitation Talks and the US opening relations with the People’s Republic of China as a strategic counterweight to the USSR.
Détente collapsed at the end of the decade with the beginning of the Soviet–Afghan War in 1979. The early 1980s were another period of elevated tension. The United States increased diplomatic, military, and economic pressures on the Soviet Union, at a time when it was already suffering from economic stagnation. In the mid-1980s, the new Soviet leader Mikhail Gorbachev introduced the liberalizing reforms of glasnost (“openness”, c. 1985) and perestroika (“reorganization”, 1987) and ended Soviet involvement in Afghanistan. Pressures for national sovereignty grew stronger in Eastern Europe, and Gorbachev refused to militarily support their governments any longer. The result in 1989 was a wave of revolutions that (with the exception of Romania) peacefully overthrew all of the communist governments of Central and Eastern Europe. The Communist Party of the Soviet Union itself lost control in the Soviet Union and was banned following an abortive coup attempt in August 1991. This in turn led to the formal dissolution of the USSR in December 1991, the declaration of independence of its constituent republics and the collapse of communist governments across much of Africa and Asia. The United States was left as the world’s only superpower.
The Cold War and its events have left a significant legacy. It is often referred to in popular culture, especially with themes of espionage and the threat of nuclear warfare. Meanwhile, a renewed state of tension between one of the Soviet Union’s successor states, the Russian Federation, and the United States in the 21st century (including its Western allies) as well as growing tension between an increasingly powerful China and the U.S. and its Western allies have each been referred to as the Second Cold War.