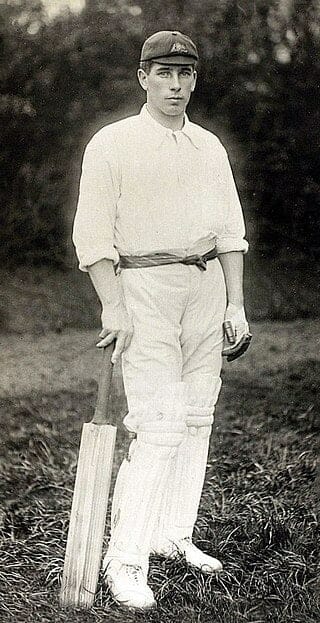 Clement “Clem” Hill (18 March 1877 – 5 September 1945) was an Australian cricketer who played 49 Test matches as a specialist batsman between 1896 and 1912. He captained the Australian team in ten Tests, winning five and losing five. A prolific run scorer, Hill scored 3,412 runs in Test cricket—a world record at the time of his retirement—at an average of 39.21 per innings, including seven centuries. In 1902, Hill was the first batsman to make 1,000 Test runs in a calendar year, a feat that would not be repeated for 45 years. His innings of 365 scored against New South Wales for South Australia in 1900–01 was a Sheffield Shield record for 27 years. The South Australian Cricket Association named a grandstand at the Adelaide Oval in his honour in 2003 and he was inducted into the Australian Cricket Hall of Fame in 2005.
A short and stocky left-handed batsman, Hill had a crouched, somewhat awkward stance. He gripped the bat low on the handle, playing with a strong bottom hand. His batting style was nonetheless attractive and effective and he was especially strong on the leg side and when cutting. Able to score quickly when required, he was also recognised for his patience and strong defence. Hill normally batted at No. 3 and, along with his contemporary Victor Trumper, he was a mainstay of the Australian batting line-up in the early years of the 20th century. Hill had a strong throwing arm and was an excellent outfielder. He was a popular team-mate and captain, respected for his directness, honesty and cheerfulness.
He played his first first-class cricket match for South Australia while still a schoolboy, aged 16. By the time he was 19, he had been included in the Australian team touring England in 1896, where he made his Test match début. At the Melbourne Cricket Ground two years later, Hill scored 188; his maiden Test century and still the highest score in Ashes Tests by a player under 21. He was named one of Wisden Cricketers of the Year in 1899, despite missing half the English season due to illness. In the 1901–02 season, Hill was dismissed in consecutive innings for 99, 98 and 97. In total he was dismissed between 90 and 99 five times in Test cricket. In 1903–04, Hill was at the centre of a riot at the Sydney Cricket Ground after he was adjudged run out in a Test match against England. With Roger Hartigan he still holds the Australian Test record partnership for the eighth wicket—243, made against England at the Adelaide Oval in 1907–08.
Hill had a strained relationship with Australian cricket authorities. He turned down an invitation to tour England in 1909 due to his unhappiness with the contract terms offered. Despite this, he was appointed Test captain in 1910–11 for the series against South Africa. His Test cricket career ended in controversy after he was involved in a brawl with cricket administrator and fellow Test selector Peter McAlister in 1912. He was one of the “Big Six”, a group of leading Australian cricketers who boycotted the 1912 Triangular Tournament in England when the players were stripped of the right to appoint the tour manager. The boycott effectively ended his Test career. After retiring from cricket, Hill worked in the horse racing industry as a stipendiary steward and later as a handicapper for races including the Caulfield Cup. Hill died in 1945 aged 68 when thrown from a tram in Melbourne in a traffic accident.