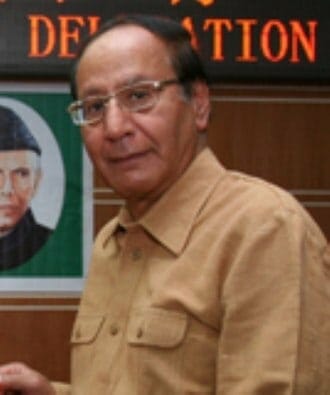 Chaudhry Shujaat Hussain (born 27 January 1946) is a senior Pakistani conservative politician hailing from Gujrat and a business oligarch who previously served as 16th Prime Minister of Pakistan from 30 June 2004 on a temporary basis during a transitional period to accommodate Shaukat Aziz till 28 August 2004. Hussain has been party president of the Pakistan Muslim League (Q) since 2003, when he had followed party founder Mian Muhammad Azhar because of his lack of a parliamentary seat.Hailing from the business-industrialist family from the Punjab Province of Pakistan, Hussain graduated from the FC College University and the Punjab University. After his graduation, Hussain subsequently joined the family business comprising large numbers of industries, textiles, agricultural farms, sugar and flour mills. He successfully contested in the non-partisan 1985 elections and was appointed as minister of industry in the government of Prime minister Muhammad Junejo, lasting until 1988. Hussain became a leader and influential conservative figure in the Islamic Democratic Alliance (IDA) between 1988 and 1990 and joined the Pakistan Muslim League (PML) under Nawaz Sharif in 1993. Hussain served as the 26th Interior minister in the government of Prime minister Nawaz Sharif in two non-consecutive terms from 1990 to 1993 and 1997 to 1999.Originally a loyalist of Nawaz Sharif, Hussain defected to autocratic leader Pervez Musharraf after 1999 and became member of the new PML-Q. His family remains influential in national politics and his younger cousin Pervez Illahi served as Chief Minister of Punjab from 2002 to 2007 during Musharraf’s military rule. Following the 2008 elections and Musharraf’s resignation, Hussain and his party became a major ally of Prime minister Yousaf Raza Gillani and President Asif Ali Zardari from the Pakistan Peoples Party.
Today i.e. November 6, 2020, at 12 pm noon Mr. Shujaat the veteran politician and former Prime minister of Pakistan was brought to the Services Hospital Lahore with the complaint of breathlessness. Doctors and Specialists examined and treated him. He is being admitted in the same VVIP Ward of the Services Hospital Lahore, where last year former premiere Mian Nawaz Sharif remained admitted during his sickness while under arrest by the National Accountability Bureau.