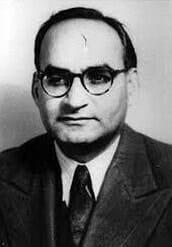 Chaudhry Muhammad Ali ‎(15 July 1905 – 2 December 1982), best known as Muhammad Ali, was the fourth Prime Minister of Pakistan, appointed on 12 August 1955 until being removed through successful passage of vote of no confidence motion in the National Assembly on 12 September 1956.His credibility is noted for promulgating the first set of the Constitution of Pakistan lost political endorsement from his party when failing to investigate the allegations on vote rigging and the secret defections in favor of the Republican Party.