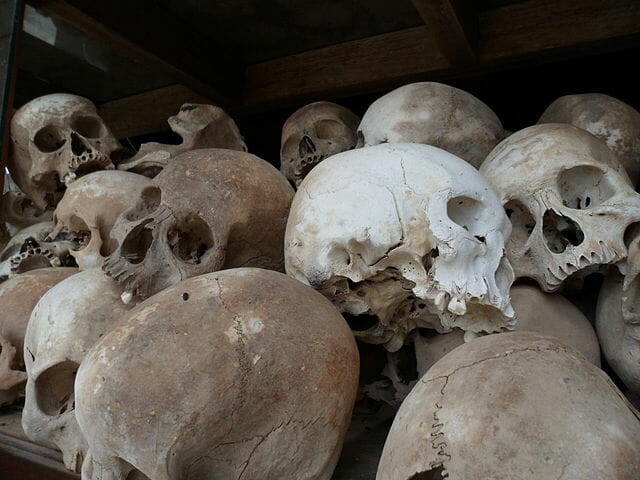 The Cambodian genocide was the systematic persecution and killing of Cambodians by the Khmer Rouge under the leadership of Pol Pot, who radically pushed Cambodia towards communism. It resulted in the deaths of 1.5 to 2 million people from 1975 to 1979, nearly a quarter of Cambodia’s 1975 population (c. 7.8 million).Pol Pot and Khmer Rouge had long been supported by the Communist Party of China (CPC) and Mao Zedong; it is estimated that at least 90% of the foreign aid to Khmer Rouge came from China, with 1975 alone seeing at least US$1 billion in interest-free economic and military aid from China. After seizing power in April 1975, the Khmer Rouge wanted to turn the country into a socialist agrarian republic, founded on the policies of ultra-Maoism and influenced by the Cultural Revolution. Pol Pot and other Khmer Rouge officials met with Mao in Beijing in June 1975, receiving approval and advice, while high-ranking CPC officials such as Zhang Chunqiao later visited Cambodia to offer help. To fulfill its goals, the Khmer Rouge emptied the cities and forced Cambodians to relocate to labor camps in the countryside, where mass executions, forced labor, physical abuse, malnutrition, and disease were rampant. In 1976, the Khmer Rouge changed the name of the country to Democratic Kampuchea.