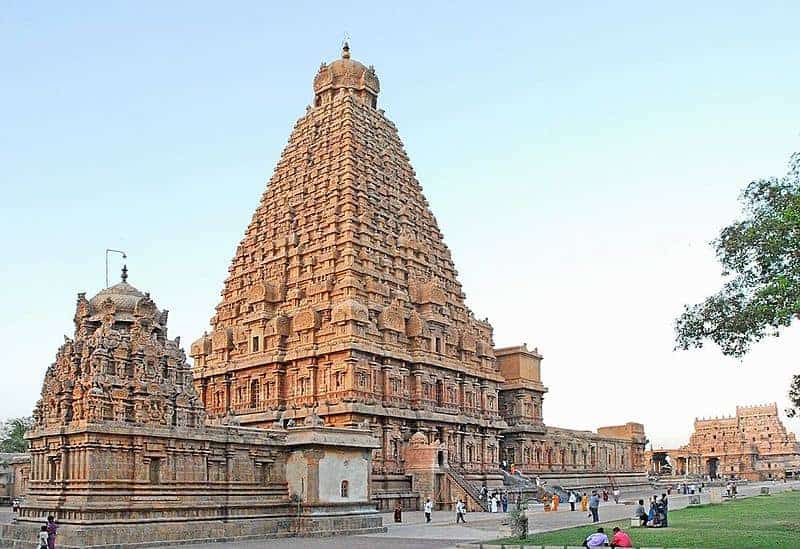 Brihadishvara Temple, also called Rajarajesvaram or Peruvudaiyār Kōvil, is a Hindu temple dedicated to Shiva located in South bank of Kaveri river in Thanjavur, Tamil Nadu, India. It is one of the largest South Indian temples and an exemplary example of a fully realized Dravidian architecture. It is called as Dhakshina Meru (Meru of south). Built by Tamil king Raja Raja Chola I between 1003 and 1010 AD, the temple is a part of the UNESCO World Heritage Site known as the “Great Living Chola Temples”, along with the Chola dynasty era Gangaikonda Cholapuram temple and Airavatesvara temple that are about 70 kilometres (43 mi) and 40 kilometres (25 mi) to its northeast respectively.The original monuments of this 11th century temple were built around a moat. It included gopura, the main temple, its massive tower, inscriptions, frescoes and sculptures predominantly related to Shaivism, but also of Vaishnavism and Shaktism traditions of Hinduism. The temple was damaged in its history and some artwork is now missing. Additional mandapam and monuments were added in centuries that followed. The temple now stands amidst fortified walls that were added after the 16th century.Built out of granite, the vimana tower above the sanctum is one of the tallest in South India. It was, in all likelihood, one of the tallest structures in the world at the time of its construction. The temple has a massive colonnaded prakara (corridor) and one of the largest Shiva lingas in India. It is also famed for the quality of its sculpture, as well as being the location that commissioned the brass Nataraja – Shiva as the lord of dance, in 11th century. The complex includes shrines for Nandi, Parvati, Kartikeya, Ganesha, Sabhapati, Dakshinamurti, Chandeshvara, Varahi and others. The temple is one of the most visited tourist attractions in Tamil Nadu.