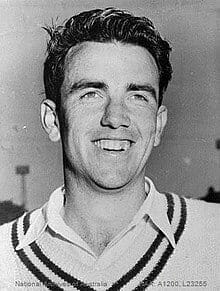 Robert Baddeley Simpson (born 3 February 1936) is a former cricketer who played for New South Wales, Western Australia and Australia, captaining the national team from 1963/64 until 1967/68, and again in 1977–78. He later had a highly successful term as the coach of the Australian team. He is also known as Bobby or Simmo.
Simpson played as a right-handed batsman and semi-regular leg spin bowler. After ten years in retirement, he returned to the spotlight at age 41 to captain Australia during the era of World Series Cricket.
In 1986 he was appointed coach of the Australian team, a position he held until being replaced by Geoff Marsh in July 1996. Under Simpson’s tutelage, the team went from a struggling team, losing a succession of Test series, to the strongest team in world cricket. Some of the team’s greatest achievements in his time as coach were winning the 1987 World Cup, regaining The Ashes in England in 1989, and overcoming the previously dominant West Indies on their home grounds in 1995. He also coached county cricket in England, with Leicestershire and Lancashire.