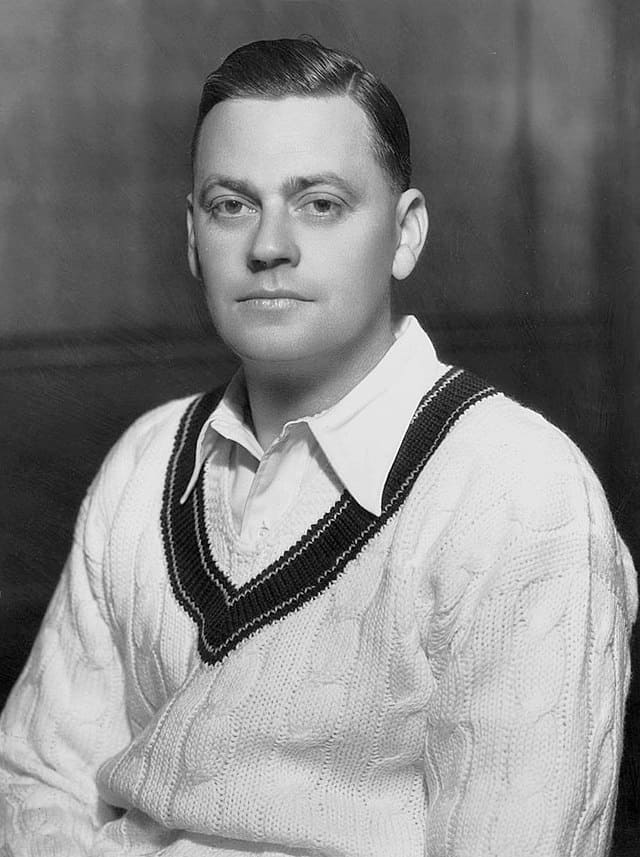 William Maldon Woodfull (22 August 1897 – 11 August 1965) was an Australian cricketer of the 1920s and 1930s. He captained both Victoria and Australia, and was best known for his dignified and moral conduct during the tumultuous bodyline series in 1932–33. Trained as a schoolteacher, Woodfull was known for his benevolent attitude towards his players, and his patience and defensive technique as an opening batsman. Woodfull was not a flamboyant player, but was known for his calm, unruffled style and his reliability in difficult situations. His opening pairing with fellow Victorian Bill Ponsford for both his state and Australia remains one of the most successful in history. While not known for his tactical skills, Woodfull was widely admired by his players and observers for his sportsmanship and ability to mould a successful and loyal team through the strength of his character.
Woodfull started playing cricket from a young age without distinction. He made his professional debut in Melbourne’s district competition staying until the age of 19. He made his first-class debut for Victoria at the age of 24 late in 1921–22. After scoring a century in his second match, Woodfull was promoted to open the following season, and he opened for the rest of his career. After scoring three centuries, including a 236, in 1925–26, he was selected for the 1926 tour of England. Regarded as one of the last players selected, Woodfull scored a double century and century in his first two innings in England to earn his debut in the first Test. Woodfull made eight centuries during the tour and topped the Australian averages and was named one of the five Wisden Cricketers of the Year.
Upon returning to Australia, Woodfull established his partnership with Ponsford, and in 1926–27 Shield season, they put on a record-breaking 375-run opening stand, setting up a world record first-class team score of 1107. Woodfull was appointed as vice-captain to Jack Ryder for the 1928–29 home Ashes series following a spate of retirements. He carried his bat in a record-breaking first Test defeat. Although England easily won 4–1, Woodfull scored three centuries, and added his best first-class score for 275 not out. Woodfull reluctantly became captain in 1930 when Ryder was dropped, and his team was derided as the worst Australian squad to tour England. It was the youngest squad to leave Australia, prompting commentators to label the team “Woodfull’s kindegarten”. After losing the first Test, Woodfull scored a century as Australia levelled the series and they won the fifth Test to regain the Ashes. Woodfull ended the tour with six first-class centuries. In 1931–32 Woodfull had his most successful Test series in his career, against South Africa, scoring 421 runs at 70.17, including his Test highest score of 161.
In 1932–33, great controversy erupted during England’s tour of Australia. The visitors used bodyline tactics—persistently aiming at the upper bodies and heads of the Australian batsmen in the hope of stifling the hosts’ strong batting line-up. The Australian public and cricket community abhorred the tactic, but Woodfull refused to retaliate or complain publicly. The controversy peaked during the third Test at the Adelaide Oval. Woodfull was felled by a blow to the heart, almost provoking a riot. After Woodfull was dismissed, English manager Plum Warner came to privately express his sympathy, to which Woodfull famously replied “I do not want to see you, Mr Warner. There are two teams out there. One is playing cricket and the other is not.” England completed a convincing 4–1 victory, but Woodfull was much praised for his stoic public behaviour.
In 1934, Woodfull led the Australians back to England for a tour that was to mend relations after assurances had been given that bodyline would not be repeated. The Australians won 2–1, and Woodfull remains the only captain to regain the Ashes twice. Woodfull retired after the tour; his family claimed that the bodyline controversy had sapped his passion for cricket. A mathematics teacher, Woodfull went on to become headmaster at his alma mater, Melbourne High School.