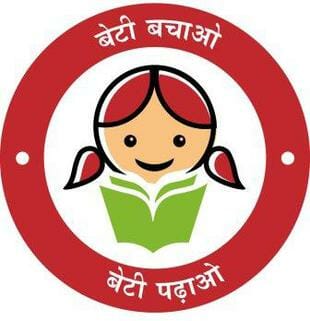 Beti Bachao, Beti Padhao (transl. Save the girl child, educate the girl child) is a campaign of the Government of India that aims to generate awareness and improve the efficiency of welfare services intended for girls in India. The scheme was launched with an initial funding of ₹100 crore (US$14 million). It mainly targets the clusters in Uttar Pradesh, Haryana, Uttarakhand, Punjab, Bihar and Delhi.According to census data in India, the child sex ratio (0–6 years) in India was 927 girls per 1,000 boys in 2001, which dropped to 918 girls for every 1,000 boys in 2011. A 2012 UNICEF report ranked India 41st among 195 countries. In the Population Census of 2011 it was revealed that the population ratio of India 2011 is 919 females per 1000 of males. The Sex Ratio 2011 shows a downward trend from the census 2001 data.
Speaking on the occasion of International Day of the Girl Child in 2014, the Prime Minister, Narendra Modi had called for the eradication of female foeticide and invited suggestions from the citizens of India via the MyGov.in portal.The Beti Bachao, Beti Padhao (BBBP) [1] scheme was launched on 22 January 2015 by PM Narendra Modi. It aims to address the issue of the declining child sex ratio image (CSR) and is a national initiative jointly run by the Ministry of Women and Child Development, the Ministry of Health and Family Welfare and the Ministry of Education. It initially focused multi-sector action in 100 districts throughout the country where there was a low CSR.
On 26 August 2016, Olympics 2016 bronze medallist Sakshi Malik was made brand ambassador for BBBP.The hashtag #SelfieWithDaughter was promoted on social media in June 2015, which started when Sunil Jaglan the sarpanch of the village Bibipur, Jind in Haryana took a selfie with his daughter Nandini and posted on Facebook on 9 June 2015. The hashtag garnered worldwide fame.