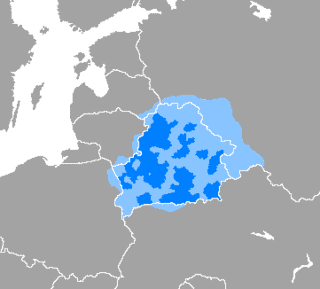 Belarusian is an East Slavic language spoken by the Belarusians. It is one of the two official languages in the Republic of Belarus under the current Constitution (Article 17), along with Russian. Additionally, it is spoken in some parts of Russia, Lithuania, Latvia, Poland, and Ukraine by Belarusian minorities in those countries.
Before Belarus gained independence in 1991, the language was only known in English as Byelorussian or Belorussian, the compound term retaining the English-language name for the Russian language in its second part, or alternatively as White Ruthenian () or White Russian. Following independence, it has acquired the additional name, Belarusian, in English.The first attempt to standardise and codify the language was undertaken following the Russian Revolution in 1917. As one of the East Slavic languages, Belarusian shares many grammatical and lexical features with other members of the group. To some extent, Russian, Rusyn, Ukrainian, and Belarusian retain a degree of mutual intelligibility. Its predecessor stage is known in Western academia as Ruthenian (14th to 17th centuries), in turn descended from what is referred to in modern linguistics as Old East Slavic (10th to 13th centuries).