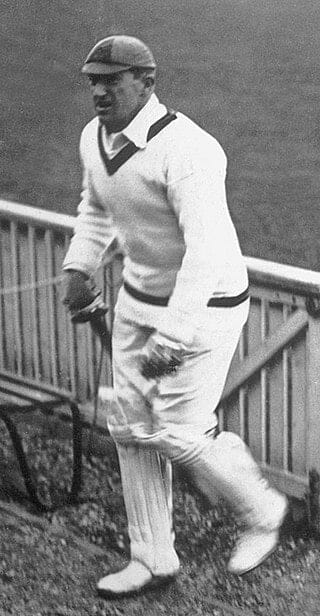 George Aubrey Faulkner (17 December 1881 – 10 September 1930) was a South African cricketer who played 25 Test matches for South Africa and fought in both the Second Boer War and World War I. In cricket, he was an all-rounder who was among the best batsmen in the world at his peak and was one of the first leg spin bowlers to use the googly.
Faulkner played Test cricket for South Africa from 1906 to 1912. His greatest achievements as a Test cricketer included taking six wickets in eleven overs against England and the first-ever double century by a South African. He was the best all-rounder in the world during his career. Following his Test career, he played club cricket in Nottingham.
Faulkner was awarded the Distinguished Service Order and Order of the Nile for his bravery in World War I. During the war, he contracted malaria multiple times, which physically deteriorated his body. Unable to play cricket at the same level as before the war, he turned instead to coaching, starting a cricket school, and training several future Test cricketers. Faulkner likely suffered from undiagnosed bipolar disorder, and he committed suicide in September 1930. In June 2021, he was inducted into the ICC Cricket Hall of Fame as one of the special inductees to mark the inaugural edition of the ICC World Test Championship final.