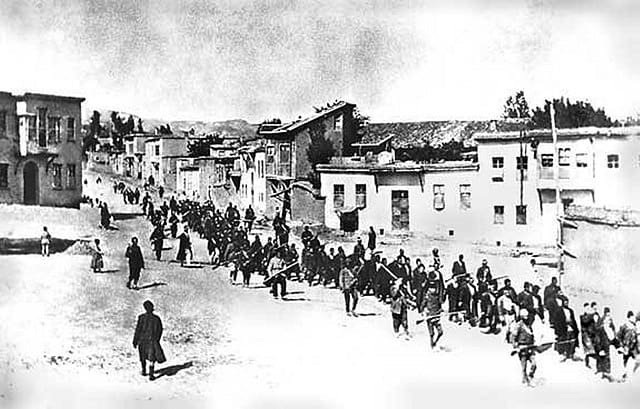 The Armenian Genocide was the systematic mass murder and expulsion of ethnic Armenians carried out in Turkey and adjoining regions by the Ottoman government during World War I. Although earlier massacres had occurred during the 19th century, and some sporadic massacres of Armenians began in mid-1914, the starting date of the genocide is conventionally held to be 24 April 1915, the day that Ottoman authorities rounded up, arrested, and deported hundreds of Armenian intellectuals and community leaders from Constantinople (now Istanbul), most of whom were eventually murdered.
The genocide, ordered by the Three Pashas as part of a process of forced Turkification, was implemented in two phases. First, the able-bodied male population was killed in massacres. Second, according to the Tehcir Law, an estimated 800,000 to 1.5 million women, children, elderly, and infirm Armenians were deported on death marches leading to the Syrian Desert in 1915 and 1916. Driven forward by military escorts, the deportees were deprived of food and water and subjected to periodic robbery, rape, and massacre. Only around 200,000 deportees were still alive by the end of 1916. According to some definitions the genocide includes the Republic of Turkey’s massacres of tens of thousands of Armenian civilians during the 1920 Turkish–Armenian War.