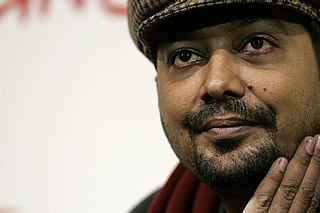 Anurag Kashyap (born 10 September 1972) is an Indian film director, writer, editor, producer, actor known for his works in Hindi cinema. He is the recipient of several accolades, including four Filmfare Awards. For his contributions to film, the Government of France awarded him the Ordre des Arts et des Lettres (Knight of the Order of Arts and letters) in 2013.