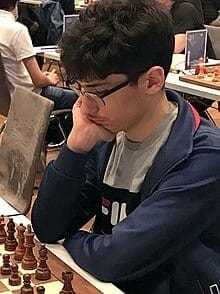 Alireza Firouzja (Persian: علی‌رضا فیروزجا, Persian pronunciation: [æliːɾezɑː fiːɾuːzˈdʒɑː]; born 18 June 2003) is an Iranian-French chess grandmaster. Since December 1, 2021, Firouzja holds the No. 2 position in the FIDE world chess rankings, and is the youngest ever 2800-rated player, beating the previous record set by Magnus Carlsen by more than five months.
A chess prodigy, Firouzja won the Iranian Chess Championship at age 12 and earned the Grandmaster title at 14. At 16, Firouzja became the second youngest 2700-rated player and won a silver medal at the 2019 World Rapid Chess Championship. In November 2021, at 18, he won the FIDE Grand Swiss tournament and an individual gold medal at the European Team Chess Championship. He won a bronze medal at the 2021 World Blitz Chess Championship.
Firouzja left the Iranian Chess Federation in 2019 because of their policies against Israeli chess players. He played under the FIDE flag until mid-2021 when he became a French citizen and began representing France, where he had already been living.