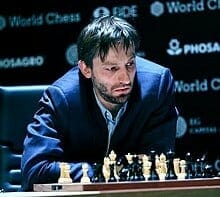 Alexander Igorevich Grischuk (born October 31, 1983) is a Russian chess grandmaster. Grischuk was the Russian champion in 2009. He is also a three-time world blitz chess champion (in 2006, 2012 and 2015).
He has competed in five Candidates Tournaments: in 2007, 2011 (when he reached the final), 2013, 2018 and 2020. He also reached the semifinals of the 2000 FIDE World Championship.
Grischuk has won two team gold-medals, three team silvers, one team bronze, and one individual bronze medal at Chess Olympiads. He also holds three team gold medals, one team silver and individual gold, two silver and one bronze from the World Team Chess Championship.