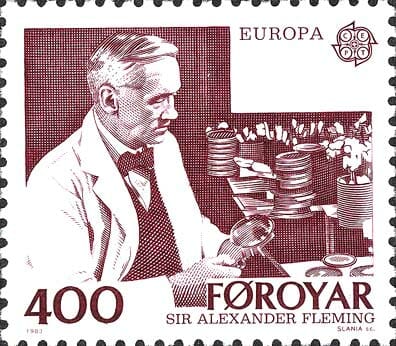 Sir Alexander Fleming (6 August 1881 – 11 March 1955) was a Scottish physician and microbiologist, best known for discovering the enzyme lysozyme and the world’s first broadly effective antibiotic substance which he named penicillin. He discovered lysozyme from his nasal discharge in 1922, and along with it a bacterium he named Micrococcus Lysodeikticus, later renamed Micrococcus luteus. His discovery of what is later named benzylpenicillin (or penicillin G) from the mould Penicillium rubens in 1928, is described as the “single greatest victory ever achieved over disease.” For this discovery he shared the Nobel Prize in Physiology or Medicine in 1945 with Howard Florey and Ernst Boris Chain.Fleming was knighted for his scientific achievements in 1944. In 1999, he was named in Time magazine’s list of the 100 Most Important People of the 20th century. In 2002, he was chosen in the BBC’s television poll for determining the 100 Greatest Britons, and in 2009, he was also voted third “greatest Scot” in an opinion poll conducted by STV, behind only Robert Burns and William Wallace.