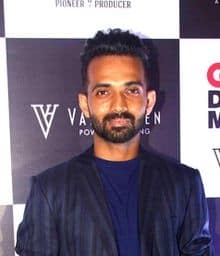 Ajinkya Madhukar Rahane (born 6 June 1988) is an Indian international cricketer. He plays primarily as a middle-order batsman in the Test format and as a top-order batsman in white-ball forms of the game. He was also the vice-captain of the India national cricket team in Tests until the home series against New Zealand in 2021 after which he was sacked. He represents Mumbai in domestic cricket and Kolkata Knight Riders in IPL.Rahane made his first-class debut in 2007–08 Ranji Trophy season for Mumbai. He made his international debut in T20Is against England at Manchester in August 2011. Rahane made his Test debut in the March 2013 Border–Gavaskar Trophy.
His first Test century came at Basin Reserve, Wellington against New Zealand. Under his captaincy, India won the 2020-21 Border–Gavaskar Trophy in Australia. As of May 2021 Rahane ranks 27th in the ICC Test batting rankings, with a tally of 612 points.