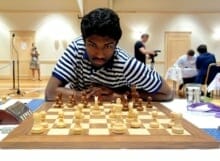 Adhiban Baskaran (born 15 August 1992) is an Indian chess Grandmaster (GM). He was the 2008 World Under-16 Champion and the 2009 Indian champion. He is currently the fourth highest rated player in India (behind Viswanathan Anand, Pentala Harikrishna, and Vidit Gujrathi). He is widely known as the Beast due to his hyper-aggressive style of play.