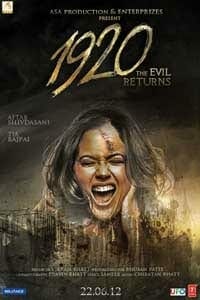 1920: The Evil Returns is a 2012 Indian horror film written by Vikram Bhatt and directed by Bhushan Patel. The film is a quasi-sequel to a 2008 film 1920, second of the 1920 (film series), and stars Aftab Shivdasani, Tia Bajpai, Vidya Malvade and Sharad Kelkar in the lead roles. The movie is third in a series of quasi-sequels released under the Bhatt Banner including Raaz – The Mystery Continues, Murder 2, Jism 2, Jannat 2 and Raaz 3D each of which had nothing to do with their respective prequels, but somehow fell in the same genre following a similar story. The trailer was released on 28 September 2012. The film released on 2 November 2012 to mixed reception and fared better at the opening Box Office weekend (122.7 million Net.) as compared to any other releases that week except Skyfall (270 million Net.). U Dinesh Kumar, Professor at IIM Bangalore and his team worked with Ami Shah of IntelliAssist, the company that carried out the social media marketing for the film, and assessed Internet activities and campaigns with the case study later published by Harvard Business Publishing.

Read More About 1920:The Evil Returns